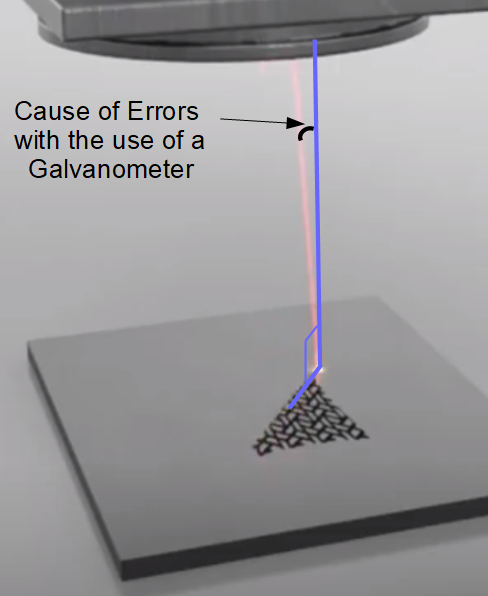 Traditional SLS/SLM printers are based on a Laser steering system named Galvanometer(s). The Galvanometers deliver the laser to the work table from a distance R. The smaller R the larger the beam as it moves from the workspace center. Therefore, to minimize the errors traditional SLS/SLM printer manufacturers make the printer large enough to produce a large R compares to the print area print size (R>>bed size).
Here is a paper quantifying the Errors.

SLS/SLM traditional 3D printer companies claimed to solve the Galvanometers errors using correction Lenses and Software. How does this solution compare to Tecnica3D

The Galvanometers causing at least three types of errors that need three types of lenses to correct them:
1. Flatfield lens to bring the focus to the work bed from a spherical surface off the table.
2. f-theta lens to correct the growing speed of the laser beam as it gets away from the center of the work area. The beam speed will increase quicker even if the galvanometer is moving in constant speed, it is growing by tan(angle_to_the_normal)
3. As the beam moves away from the center the striking angle to the work surface to the normal will grow and energy absorbed by the surface will decrease by E* Cos 4 (FOV) where FOV is optics the Field Of View.

There is no magic lens that corrects all of these errors. These errors are mitigated with the limitation of not the bed size. Therefore, limited in making large prints. Tecnica3D does not have these errors in the first place. In fact, Tecnica does not use Lenses and also reduces the optical components. Therefore, the system is easy to align along the optical axis while also eliminating lenses errors (lenses will add aberration error as well)

Tecnica developed the Tenica3D system to address high-speed, high-definition 3D printing from the ground up while the Galvanometers based system was developed over 40 years ago to draw images with rough accuracy. Nowadays, the traditional SLS/SLM companies patch the Galvanometer to mitigate the fundamental Errors. Therefore, not solving the Errors.

Will this technology be available to OEM and printer makers companies? So they will offer also a better printer

Tecnica released the print-head as OEM product in Q4 2020.

Small companies can now afford a 3D SLS/SLM printer. And most important there is no need to have a printer the size of a room to print a high quality part.

Will tecnica work with companies to address solutions in vertical markets

Tecnica, will be evaluating such cases favorably and assist in the process

What CASA stands for

Technically, it is possible and cost effective if the manufacturer is one of our partners. Otherwise , contact Tecnica to explore other options.

Tecnica3D does not have an offset Error to start with.

In your published article you mentioned “other Errors” in relationship to the use of Galvanometer. Can you expand on this.

In the article, we focused on theoretical Errors. This means what are the best results a Galvanometer based 3D printer can achieve. In actuality, there are factors such as Optics alignment, where the optical axis is at the center of all mirrors and lenses. The more mirrors & lenses there are the more errors. Additionally, since Tecnica3D is lens-free there is a need for a much simpler alignment. Other errors relate to the Galvanometer are offset Errors. Offset Errors are errors that happen when the Galvanometer is losing its Zero origin in the coordinate system. To mitigate this Error the Galvanometer is “warmed up” a few hours prior to the printing process. Also, during the print process, the Galvanometer would stop the print and test how much it lost its 0 and try to rectify it. Please note: it is not one 0 but two 0-es that need to be corrected; X-Y.

An additional source of Errors is derived from changes in working temperature. Changes in temperature Errors are severed. It is measured by a temperature coefficient quantified by microradians/C°. The temperature regulation module makes the Galvanometer more expensive; as an example, a typical coefficient temperature Error is about 2 micro radian/C°. A change of 10°C inflicts 20 micro radians Error on the Galvanometer. This Error is multiplied by 2 for the Field of View. Therefore, the Error on the work surface is quantified to 40 microradians. Consider the optics to be 1 meter away from the work surface then the 40 micro radians Error is translated to surface error positioning Error of 40 micrometers. This gives you also a glimpse into the maximum theoretical resolution a traditional SLS/SLM printer can achieve.

Tecnica3D is a much more simplified method where it does not fix its 0 as it does not lose it by definition. The tecnica3D positioning system is not affected by temperature changes.