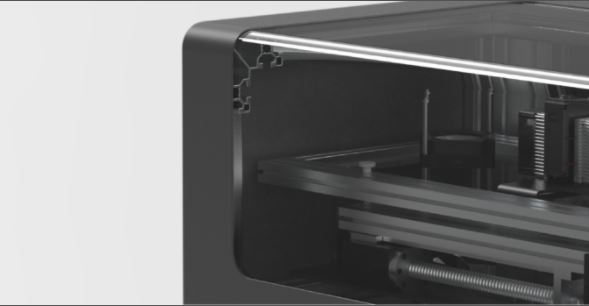 We design and manufacture innovative industrial-grade 3D printers and print heads for plastic and metal. Our patented laser engine technology will dramatically improve the quality, consistency and productivity of 3D Printers, making them perfect for end-use part manufacturing, not just prototyping.

Massive and growing market: The 3D printing market is over $12 billion today with sustained double-digit growth and is expected to grow to $34.8 billion by 2026. The kinds of printers we build – selective laser sintering of plastic and selective laser melting of metal – have the major market share.

Disruptive technology: Our unique, multi-patented print heads and printers will provide the quality, productivity, and cost efficiencies that will enable lucrative high-end manufacturing applications to convert to 3D printing, further expanding the market.

Intellectual Property: Our revolutionary technology is protected by our deep intellectual property portfolio, with proprietary algorithms and multiple patents across the globe.

Expect revenue in early 2022: We have already built a prototype print head and printer that prove the feasibility of our innovative design and are currently developing a production model for strategic customer sales in Q3 2022.

Broad adoption of 3D printing for manufacturing end-use parts has been limited by inconsistent part quality, volume cost inefficiency, and lack of productivity.

For the last four decades, all SLS/SLM 3D printer manufacturers have used the same core technology – galvanometers – to steer the laser beam across the print surface. Galvanometers have inherent flaws that make it impossible to precisely control the amount of energy supplied to each point on the print surface. This makes surface temperature hard to control, which results in parts that are porous and not internally homogeneous. In particular, high-quality metal parts, which require very precisely controlled print temperature, are still out of reach with the current technology.

These inconsistencies are amplified in manufacturing, where multiple copies of the same part are printed day after day and on several different printers.  The inconsistencies also manifest across a single part when attempting to print larger parts.

In an attempt to address the poor productivity of a single laser, manufacturers of SLS/SLM printers have implemented multi-laser-head printers. This adds yet another potential for variation, as each print head has distinct errors.

To mitigate these issues, 3D SLS/SLM printer manufacturers have added some workarounds, like stitching algorithms, pausing the print to avoid hot spots, complex calibration processes, and special f-theta lenses. But these complex workarounds don’t address the root cause of the inconsistencies and have made the printers even more expensive, further limiting cost efficiencies.

As a result, 3D printing has been used more for prototyping than for manufacturing end-use parts.

Tecnica’s 3D printers use our revolutionary, multi-patented Øgon print head instead of galvanometers to steer the laser beam across the print surface.
Unlike galvanometers, the Øgon’s architecture ensures consistent energy delivery and precise positioning of the laser beam on the surface because of its unique properties:

With the Øgon’s pinpoint accuracy and precise energy and temperature regulation, we believe we can achieve the consistent high quality, homogeneity, and strength that product designers require for final-part production, especially in metal.

Because the simple, elegant design of Tecnica’s Øgon print head eliminates the need for the complex workarounds used by galvanometers, it provides a more robust and cost-effective solution. We believe Tecnica’s printers will offer the productivity and cost efficiencies that meet supply chain managers’ requirements for final parts.

Factors accelerating the growth of this market include

For plastic, SLS is the preferred technology, with a CAGR of 24% for the next four years. (Source)

SLS provides enhanced durability and has proven to be cost and material-friendly, as it does not require any dedicated support structure post-printing.  It has a wide array of applications across various verticals, including aerospace, defense, automotive, and biotech, among others.

Metal has overall higher revenue growth rates than plastic, according to Wohler’s Report.

SLM is the preferred 3D printing solution for metal because the resulting parts are extremely dense. That means they have the properties necessary for structural part applications, like customizing medical implants or lightweighting structures in aerospace and automotive. According to AM Power’s Supplier Forecast for 2023, SLM will have ~64% of the system sales revenue of all metal systems.

We believe Tecnica’s innovative, patented design will help fuel the growth of this market even further. The enhanced quality, repeatability, and scalability of our printers will enable new 3D printing applications not achievable with the technology currently on the market.

Tecnica’s main sources of revenue will be:

We have already built a prototype SLS print head and printer that prove the feasibility of our innovative design. We are now completing development of a second-generation model with the standard parts, functionality, and features that will be required for production.

Once we have completed refining and perfecting our current model, the Casa II, we will produce a production model for thermoplastic nylon, the most commonly used material in SLS 3D printing. We will then further modify the design to print metal, which requires a higher process temperature.

In parallel with developing our products, we have been securing our intellectual property. We have already obtained multiple patents across the globe and are continuing to file for more. We are also gaining visibility in the industry through our presentations at 3D printing conferences.

We expect to begin to generate revenue with our production models starting in Q4 2022.